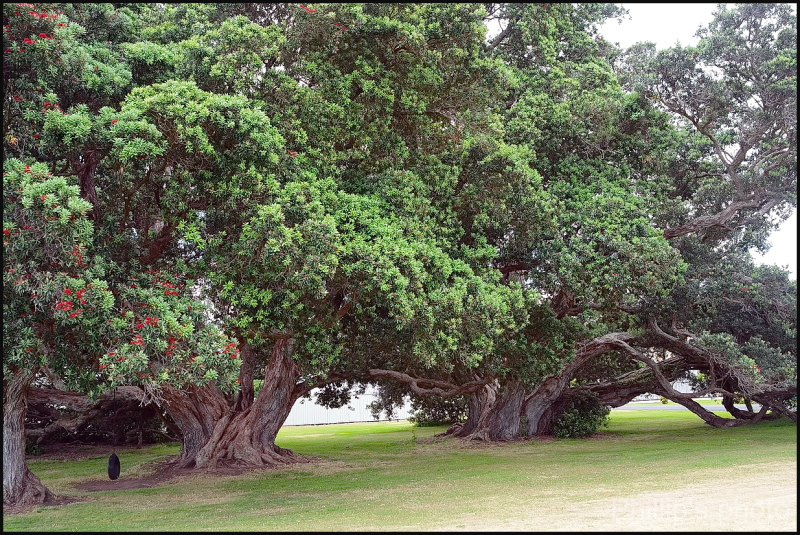 Previous Next
← previous day next day →

The pohutukawa tree (Metrosideros excelsa) with its crimson flower has become an established part of the New Zealand Christmas tradition. This iconic Kiwi Christmas tree, which often features on greeting cards and in poems and songs, has become an important symbol for New Zealanders at home and abroad.

In 1833 the missionary Henry Williams described holding service under a ‘wide spreading pohutukawa’. The first recorded reference to the pohutukawa as a Christmas tree came in 1867 when the Austrian geologist Ferdinand von Hochstetter noted that settlers referred to it as such. The pohutukawa, he observed, ‘about Christmas … are full of charming … blossoms’; ‘the settler decorates his church and dwellings with its lovely branches’. Other 19th-century references described the pohutukawa tree as the ‘Settlers Christmas tree’ and ‘Antipodean holly’.

In 1941 army chaplain Ted Forsman composed a pohutukawa carol in which he made reference to ‘your red tufts, our snow’. Forsman was serving in the Libyan Desert at the time, hardly the surroundings normally associated with the image of a fiery red pohutukawa tree. Many of his fellow New Zealanders, though, would have instantly identified with the image.

Today many school children sing about how ‘the native Christmas tree of Aotearoa’ fills their hearts ‘with aroha’.

Pohutukawa and its cousin rata also hold a prominent place in Maori tradition. Legends tell of Tawhaki, a young Maori warrior, who attempted to find heaven to seek help in avenging the death of his father. He fell to earth and the crimson flowers are said to represent his blood.

A gnarled, twisted pohutukawa on the windswept cliff top at Cape Reinga, the northern tip of New Zealand, has become of great significance to many New Zealanders. For Maori this small, venerated pohutukawa is known as ‘the place of leaping’. It is from here that the spirits of the dead begin their journey to their traditional homeland of Hawaiki. From this point the spirits leap off the headland and climb down the roots of the 800-year-old tree, descending into the underworld on their return journey.
...

Such beautiful and regal trees.

@Robert D. Burr: Yes they are

@Bruce: Thank you Bruce. The photos do not really do the trees full justice.